Magpick uses electromagnetic induction to sense the motion of the guitar pick while Bela analyses, processes and translates this motion into nuanced, low latency sonic interactions. 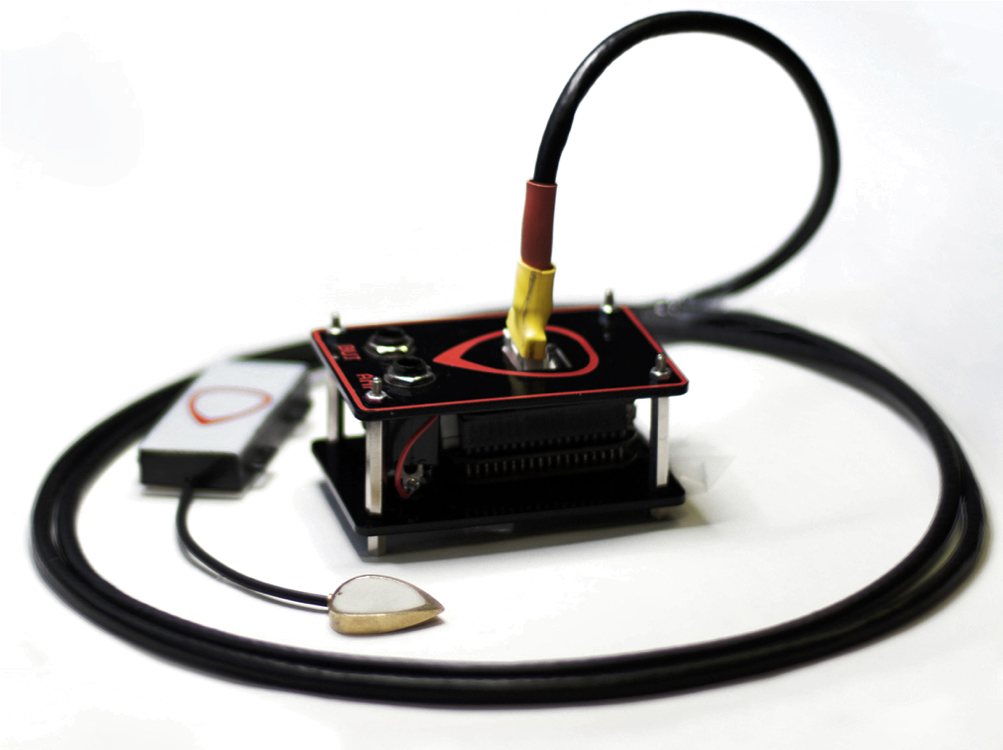 The augmented pick contains a coil of copper wire and senses guitarists’ gestures by interacting with the magnetic field generated by any guitar pickups. A voltage is generated, which relates to the motion of the pick with respect to the magnets in the guitar pickup, and this in turn gives information about the gestures of the plucking hand. Thanks to Bela, this information is captured with high resolution, and low latency, and it is used to modify the guitar sound in ways that can be compatible with existing guitar techniques. The technology is minimally invasive, as it doesn’t require additional hardware to be installed on the guitar. The most significant features of the pick signals are: they are created only when the guitarist strums over the pickup area (as opposed to over the fretboard, for instance); they respond to pick motion above the strings (not necessarily touching them); that they sense the intensity of movement with a wide dynamic range.

To maintain a good signal-to-noise ratio with such a small signal, two specialised amplifier circuits, described in the publication Magpick: an Augmented Guitar Pick for Nuanced Control, were designed. Each amplifier produces a type of signal, which we’ll refer to as integrator and proportional, with different characteristics. The integrator signal (see image below in blue) is useful to detect slower motions, such as waving the Magpick above the magnets. The proportional signal (see image below in orange) is suitable for detecting high-frequency transient events such as the snap of the pick following plucking a string. 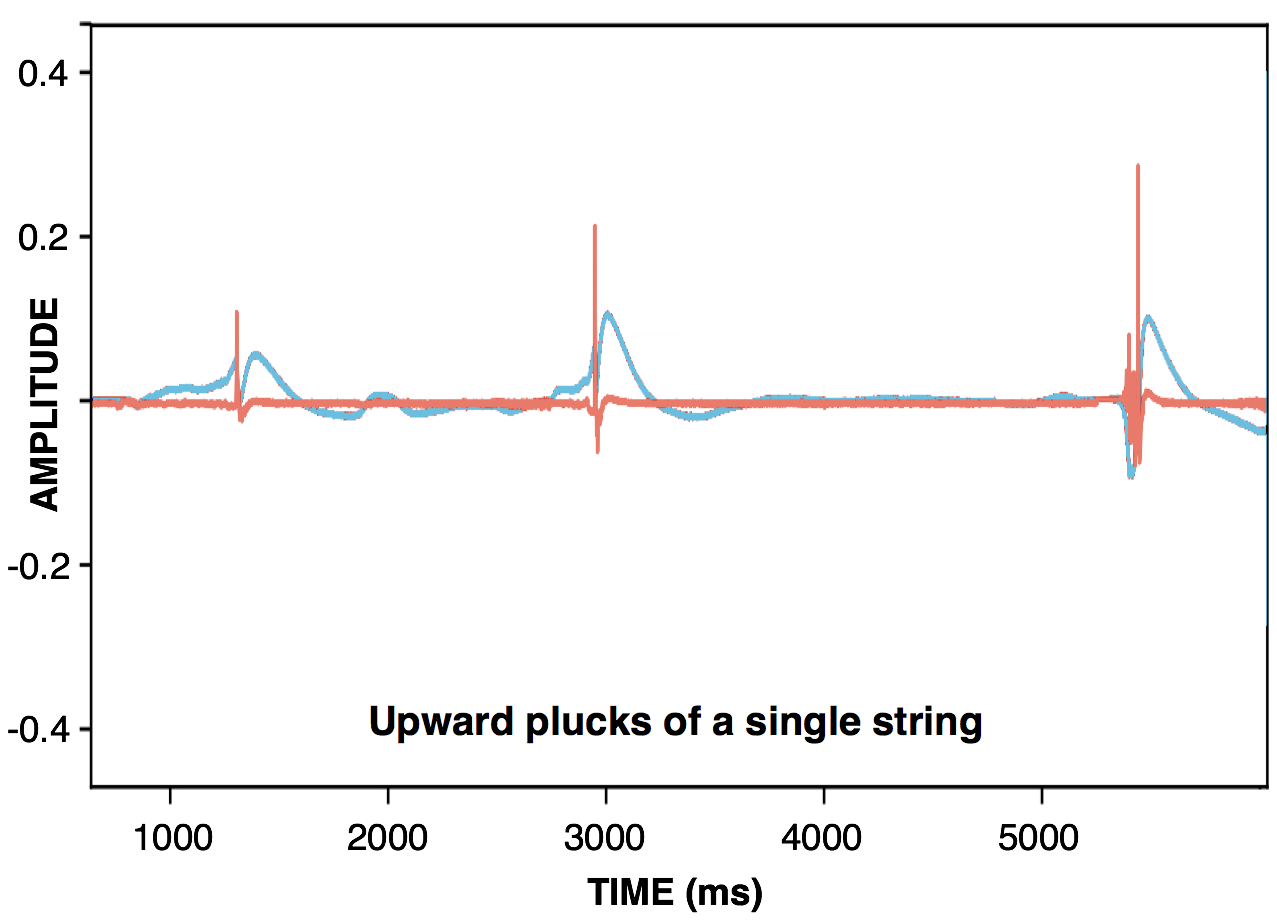 The amplified signals were connected to two analog inputs of a Bela Mini. The signal from the electric guitar (guitar-signal) itself is connected to a third input. In the Bela board, the three signals are combined with a Pure Data patch that processes the sound to be sent to the guitar amplifier.

So far, we developed three different sound designs that combine the guitar signal with the control signals generated by the Magpick.

The most direct combination of the pick signal with the guitar-signal is a simple multiplication of the two. This condition allows guitarists to control the envelope of the sound by moving the pick above the strings after the strings are plucked. As an example, to achieve a gradual attack, a guitarist would pluck the string(s) on the fretboard and slowly move the plucking hand holding the Magpick over the neck pickup. Then, she could air-strum above the strings to control the sustain.

In this condition, air-strumming above the strings in the pickup area results in a nuanced tremolo effect with a higher degree of control and expressivity with respect to tremolo pedals. Regular tremolo effects use low frequency oscillators to affect the amplitude of the guitar signals.

In this condition the output is a combination of the guitar signal sent to the output unprocessed plus an effected version of the guitar-signal with one or more parameters controlled by the pick-signal. As an example, we developed an audio-effect running on Bela and designed with Pure Data, which we named harmonised delay. The effect takes the guitar signal, performs an FFT and delay each resulting partial producing a spectral harmonic arpeggio that its summed to the guitar sound.

The effect is triggered when the pick signal goes above a certain threshold. Then, the intensity of the pick-signal influences the number of the generated partials and the delay interval between them. This solution allows guitarists to control the speed of spectral arpeggios directly from the pick: the more intense the strumming the higher the frequencies are reached and the shorter the delay between them (in a range from 0 to 255 ms). Consequently, a high pick-signal reaches high frequencies and produces brighter harmonic sounds. The proportional preamp was used for its rapid transients. This effect relies on the low-latency feature of Bela as the whole process is based on a fast peak detection of the signal input to determine the resulting sonic output.

This effect is basically a simple granulator. It stores the last 5 seconds of the guitar signal in a buffer, then a portion of the recorded audio is randomly selected and played back at the original speed. The length of the selection varies each time randomly between 1 and 2 seconds. A fade-in and fade-out envelope is also added to each played back sound to improve the homogeneity of the output. Two of these playback buffers are active at the same time.

The volume of the effect is controlled by the pick-signal using the integrator preamp. This sound can be used as a sort of reversed delay on top of what a guitarist is playing or might even “record” a short phrase as per normal playing and then play it back, scrambled, by moving the Magpick above the pickup area. The below pseudocode shows how little signal processing is needed to achieve a satisfying interaction when the sensor and physical design work well. 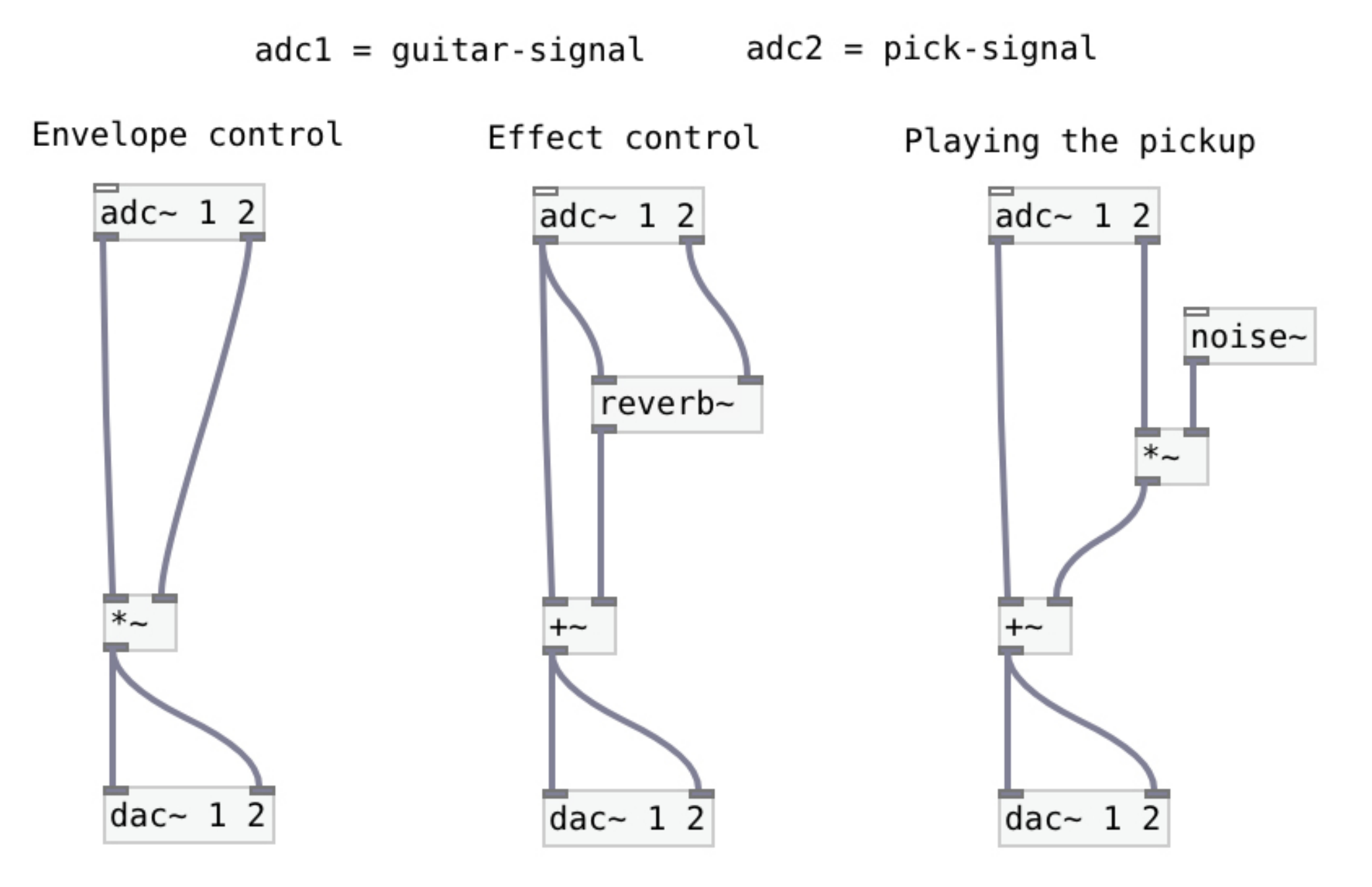 Magpick is an ongoing project. You can find more information in the research papers: Magpick: an Augmented Guitar Pick for Nuanced Control, and Designing Creative Tensions between Concept and Embodied Practice. Stay tuned for further developments!