In this post Jacob Harrison introduces the one-handed bass, an instrument that mechanises the fretting hand of a bass guitarist using Bela and an array of solenoids.

In summer 2016 we worked with the One-Handed Musical Instrument Trust (OHMI) on a design project concerned with adapting the bass guitar for one-handed playing. While many approaches to one-handed guitar playing rely on using a robotic picking hand, we wanted to give the performer the high degree of control over the expressivity of the sound that can be conveyed by the right hand. For this reason we designed an instrument that combines the picking hand of the performer with a mechanical fretting device. Inspired by musical robotics projects, we decided to design and build a prototype solenoid-actuated fretting mechanism, which attaches to the neck of a bass guitar. The mechanism is controlled via MIDI, which allows a range of controllers to be used. As it’s a prototype device we only used six solenoid motors on the 2nd 3rd and 4th frets of the A and D strings.

Initially we used the Arduino-based Teensy microcontroller to drive the solenoid circuits. To get MIDI signals from our controller (an Arturia Beatstep) to the Teensy, we had a Pure Data patch running on a laptop. This arrangement was great for early prototypes, but the necessity for an intermediate laptop affected the usability of the instrument. Bela can act as a MIDI host and can run Pure Data patches so we were able to cut out the laptop altogether and have our USB MIDI controller interact directly with the same Pure Data patch used previously, this time running on Bela. We used Bela’s analogue outputs to drive the solenoid motors, using the same external circuitry as we had with the Teensy.

Solenoids require a higher current than Bela can provide, so we required an external power supply. Here’s a schematic of the circuitry we used for a single solenoid channel. We used a TIP102 transistor to drive each solenoid: 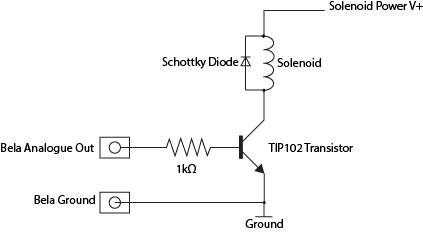 Schematic of the solenoid driving circuit.

The final circuit on a breadboard.

Listening for incoming MIDI messages and passing them to the analogue outputs only requires a very simple Pure Data patch. We used the [notein] object to listen for any incoming MIDI notes. We then used the [sel] object to extract MIDI notes corresponding to the buttons on the controller that we wanted to use. The arguments of the [sel] object are the MIDI note numbers we are looking for, and the outputs correspond to the order that these arguments are written. We then connect the outputs to corresponding [dac~] objects. 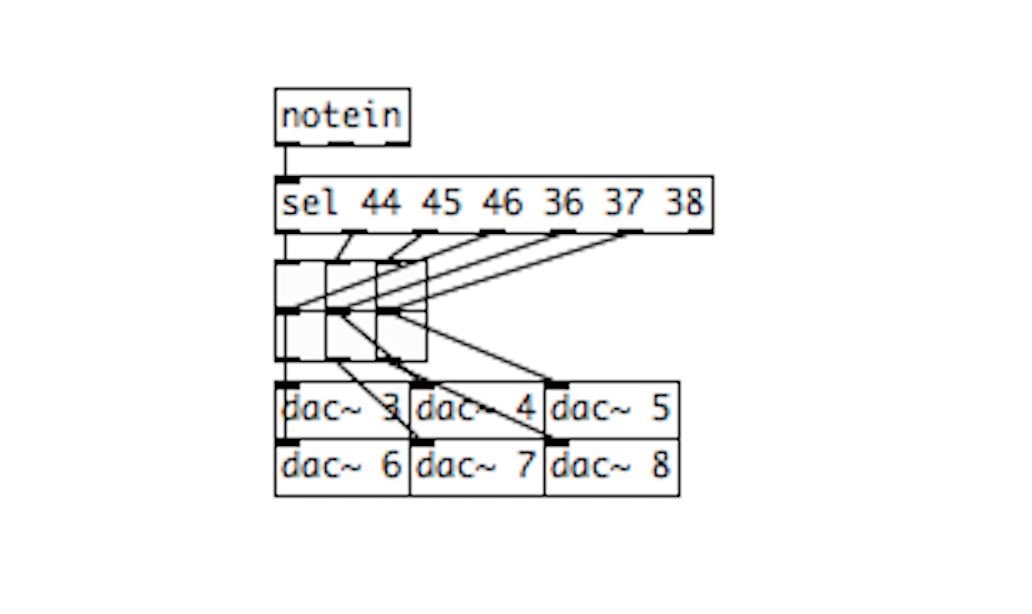 The Pure Data patch that we ran on Bela. 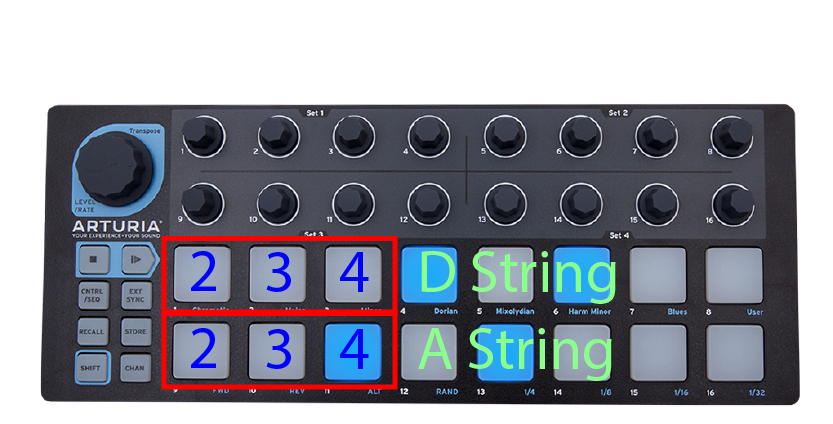 An example of how we mapped the MIDI controller to the actuation of the solenoids.

Putting it all together

The fretting mechanism itself is made out of lasercut plywood, a few threaded metal rods, nuts, bolts, and a lot of cable ties. It is made up of eight clamps, which attach to either side of the neck. The threaded rod connects the clamps on either side of the neck, and provide a hinge for the laser cut fretting arms to rotate around. The clamps hold the solenoids perpendicular to the neck, and the tips of the fretting arms are attached to the solenoid plungers. Whenever the solenoid is activated, the fretting arm is pulled down, and presses the string onto the fretboard. A spring return at the base of each fretting arm pushes each arm back up to rest height to avoid brushing the strings when note in use. 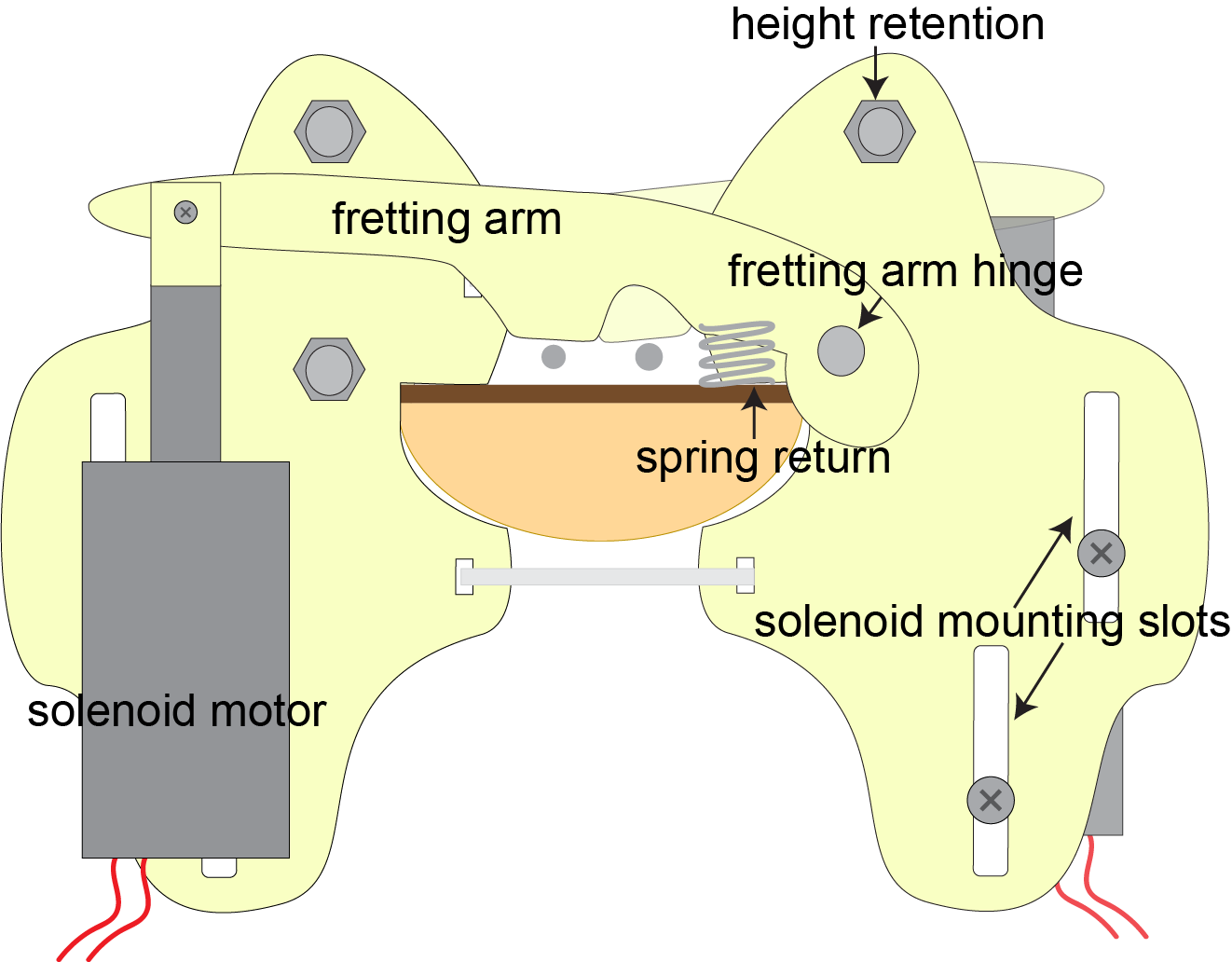 A diagram of the fretting mechanism.

Here’s a video of the finished system, first being played with the free hand, then with the feet:

This project was made using Bela, the open-source platform for ultra-low latency audio and sensor processing. Find out more on our website, buy Bela at our shop, follow us on twitter or join our community and discuss this post on our forum.