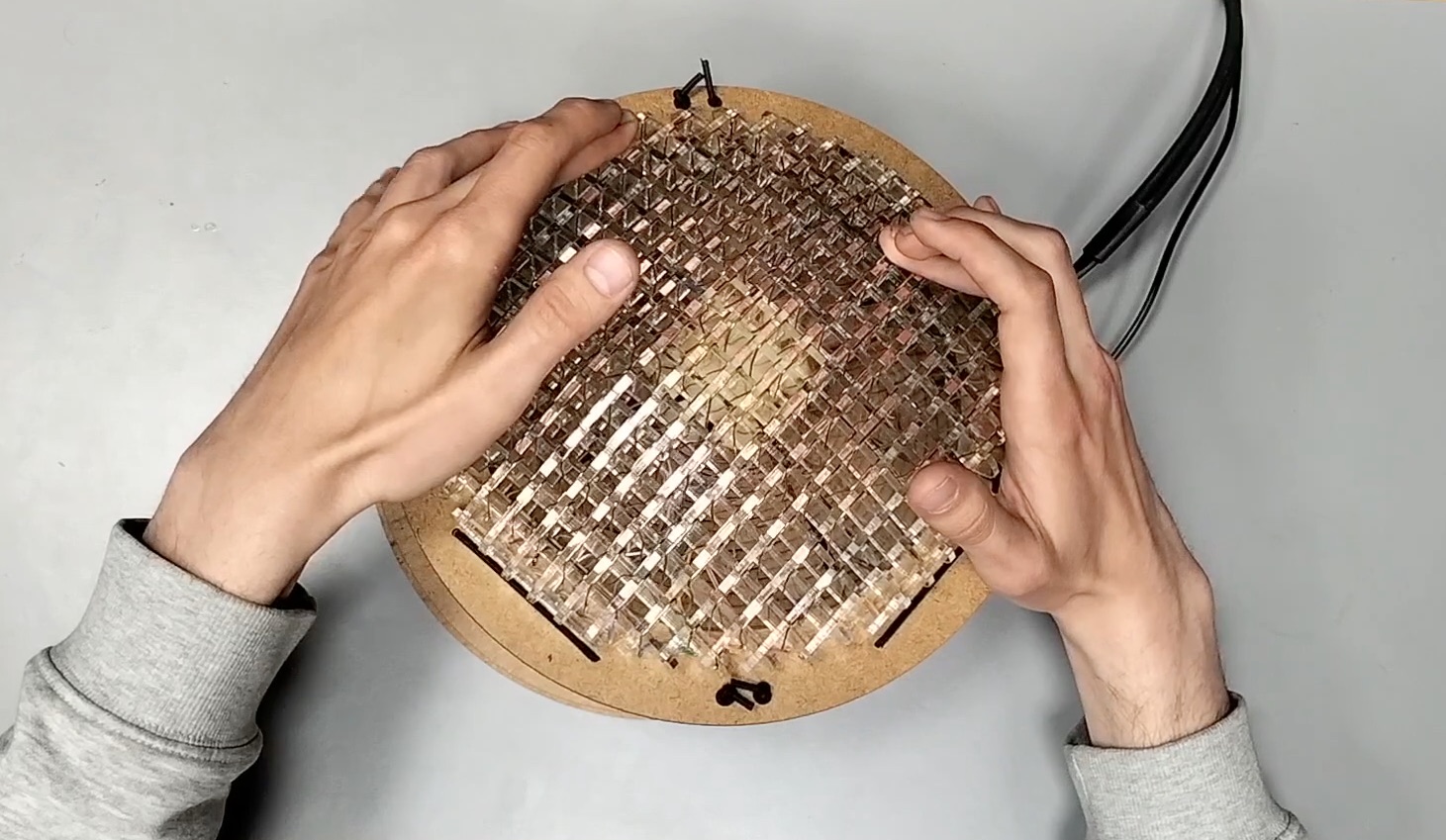 Kuplen (The Dome) is a new digital musical instrument with Bela at its heart. Kuplen was designed by Marco Timossi, Gabriel Gustafsson and Tommy Rushton in Copenhagen and has approachability, simplicity, and tactility at its core. In this post the makers explain how they designed this great looking instrument which has loads of expressive sonic potential.

Kuplen’s physical interface is a dome of acrylic slats with copper wire woven through it. The rows and columns of the grid are connected to a Trill Craft sensor to create a bespoke capacitive touch surface. Kuplen combines touch position on the grid with the intensity of the reading on each Craft channel to create a 3D input space. 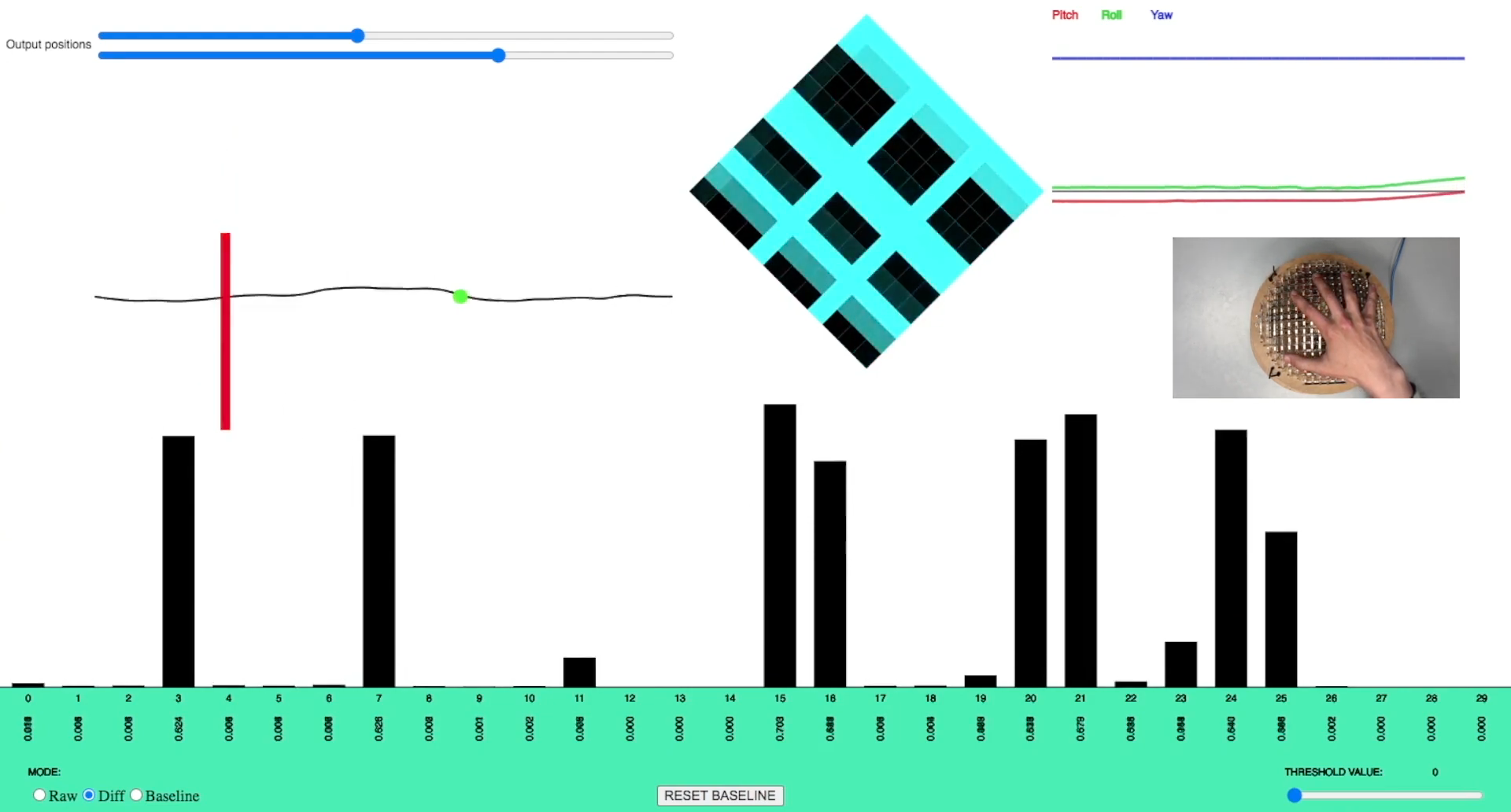 Interface used for visualising sensor signals and parameters of the physical model. This was created using p5.js and Bela GUI. See the video above for a full explanation.

For extra tactility and some physical feedback, the dome is suspended by elastic strings above a tapering base; the resulting structure has a bit of mushroomy vibe to it, wouldn’t you say? The dome can be tilted and twisted as well as touched and tapped; an IMU mounted beneath the dome reports its spatial orientation. 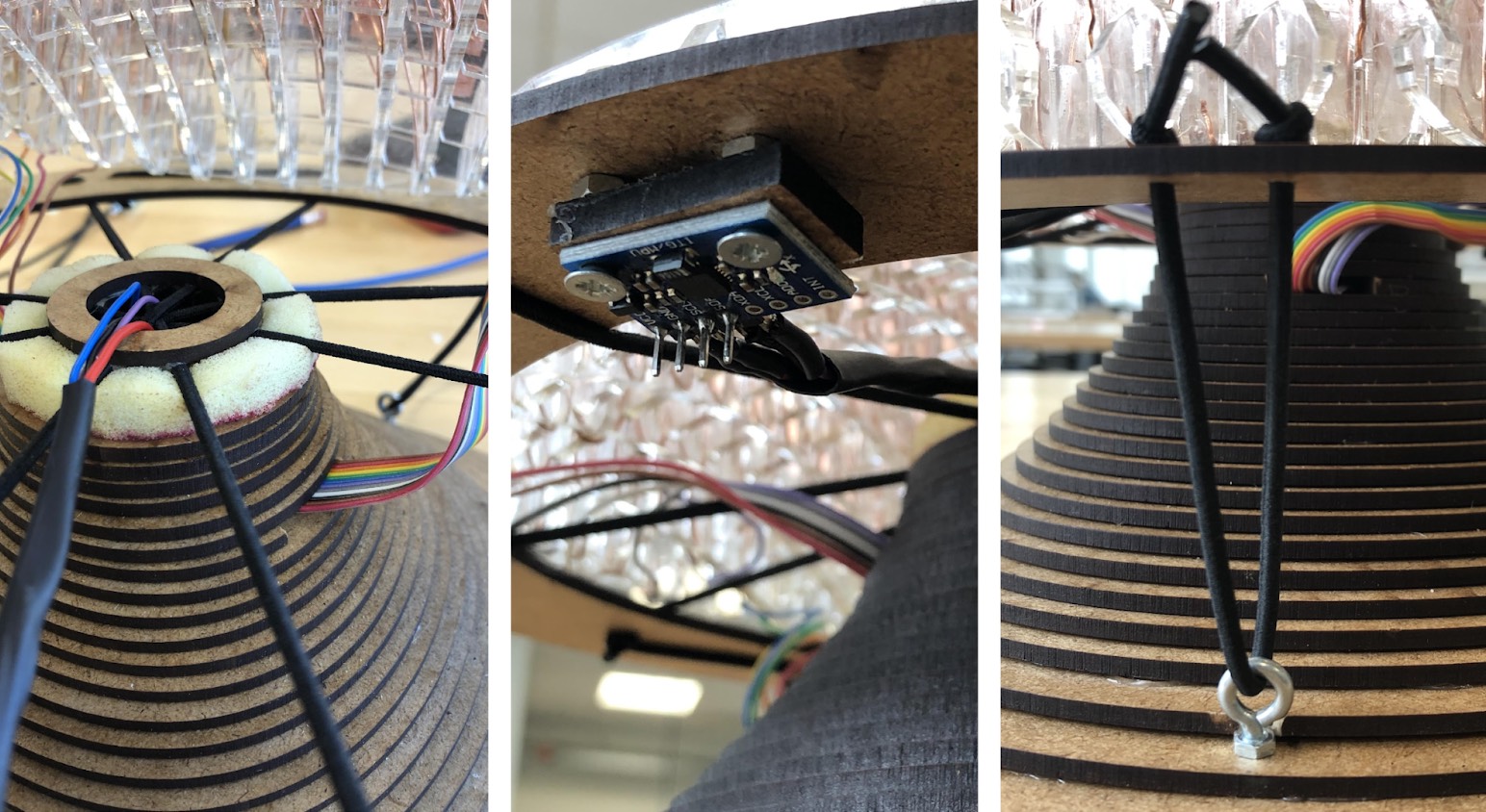 The layered plywood and IMU in the instrument's body.

The key to making Kuplen an engaging musical experience for the performer was to match its approachable interface with an expressive sound engine. We created a bowed string physical model using finite difference time-domain methods and implemented it in C++, mapping incoming sensor data to bow position, force and velocity.

Block diagram showing how the different parts of the instrument are connected together.

The simulated string and bow are complemented by a simulated finger (a mass-spring damping element) that can be applied to the string using the columns of the grid, then moved around by tilting the dome. We used nonlinear models for the bow and finger; coupled with a really long virtual string, Kuplen produces all manner of crunchy sounds, pitch glides and harmonics. It’s great for deep, rumbly textures, but with a bit of practice it’s possible to play something melodic too. 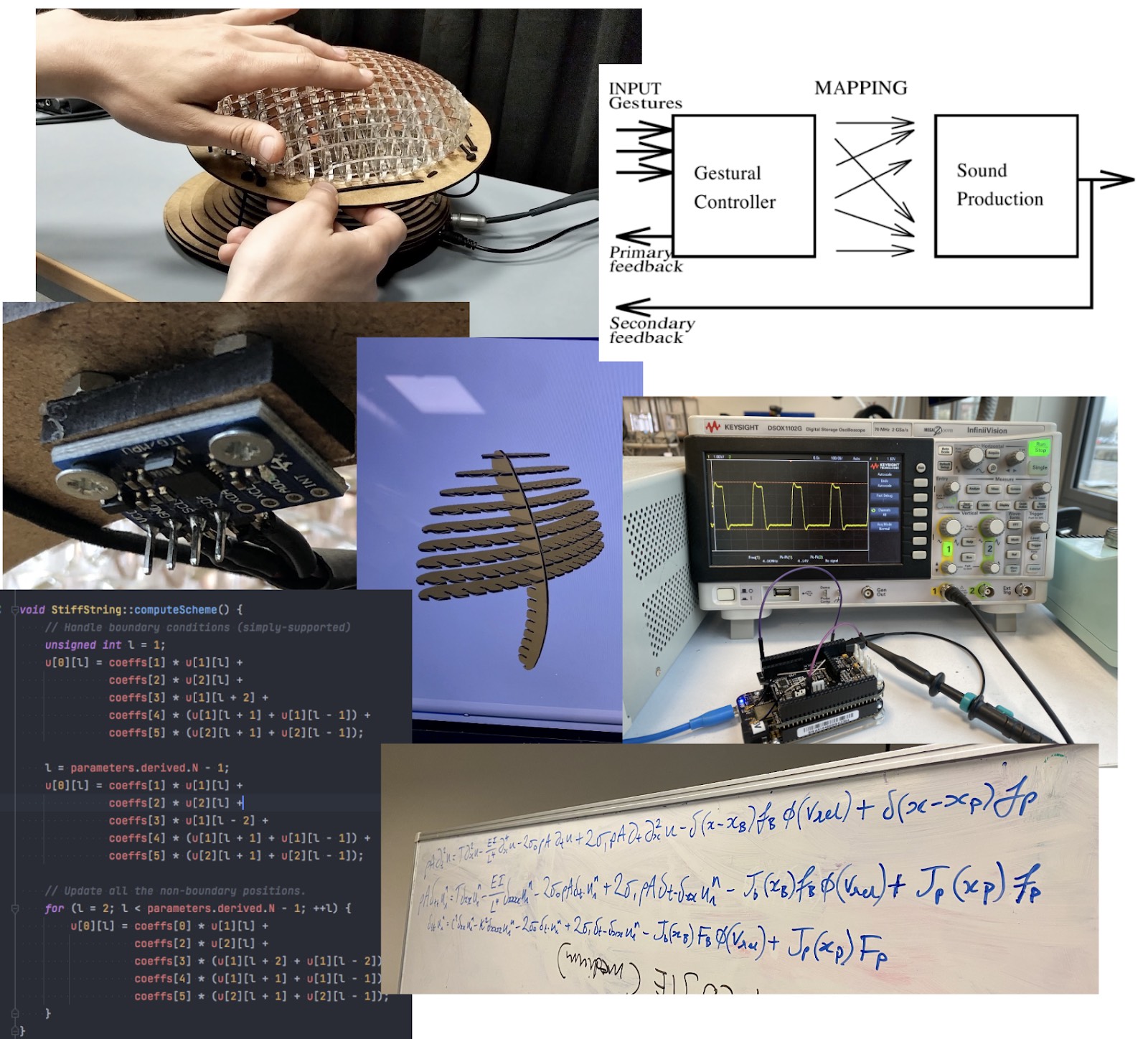 The team behind Kuplen is a trio of Sound & Music Computing masters students at Aalborg University (AAU), Copenhagen. If you would like to know more details about the implementation and physical modelling then you can read this paper.

Marco is an up and coming artist and electronic musician with a strong passion for designing electronic instruments and interactive musical systems. Through his work, he explores the crossover between the sonic and physical media spanning across installations, music production, live gigs, and djing.

As an interdisciplinary sound artist, sound designer, and music technology enthusiast, Gabriel creates a hybrid of new music aesthetics and synthesis-fusing electronic sounds. Through long-form electroacoustic pieces and ambient-experimental production, his exercises in music productions are tied from a considerable academic background in electroacoustics and self-driven study in experimental compositions. These learnings, put into perspective by the latest technological advancements in both hardware and software, allowed Gabriel to discover, expand, and experiment upon newfound possibilities of enhanced sonic experiences in instrument making.

With a background in web and application development, Tommy much prefers doing fun things with audio. He is now frequently to be found in the AAU lab, building new instruments and experimenting with microcontrollers, and sometimes working on an auditory biofeedback system for runners. 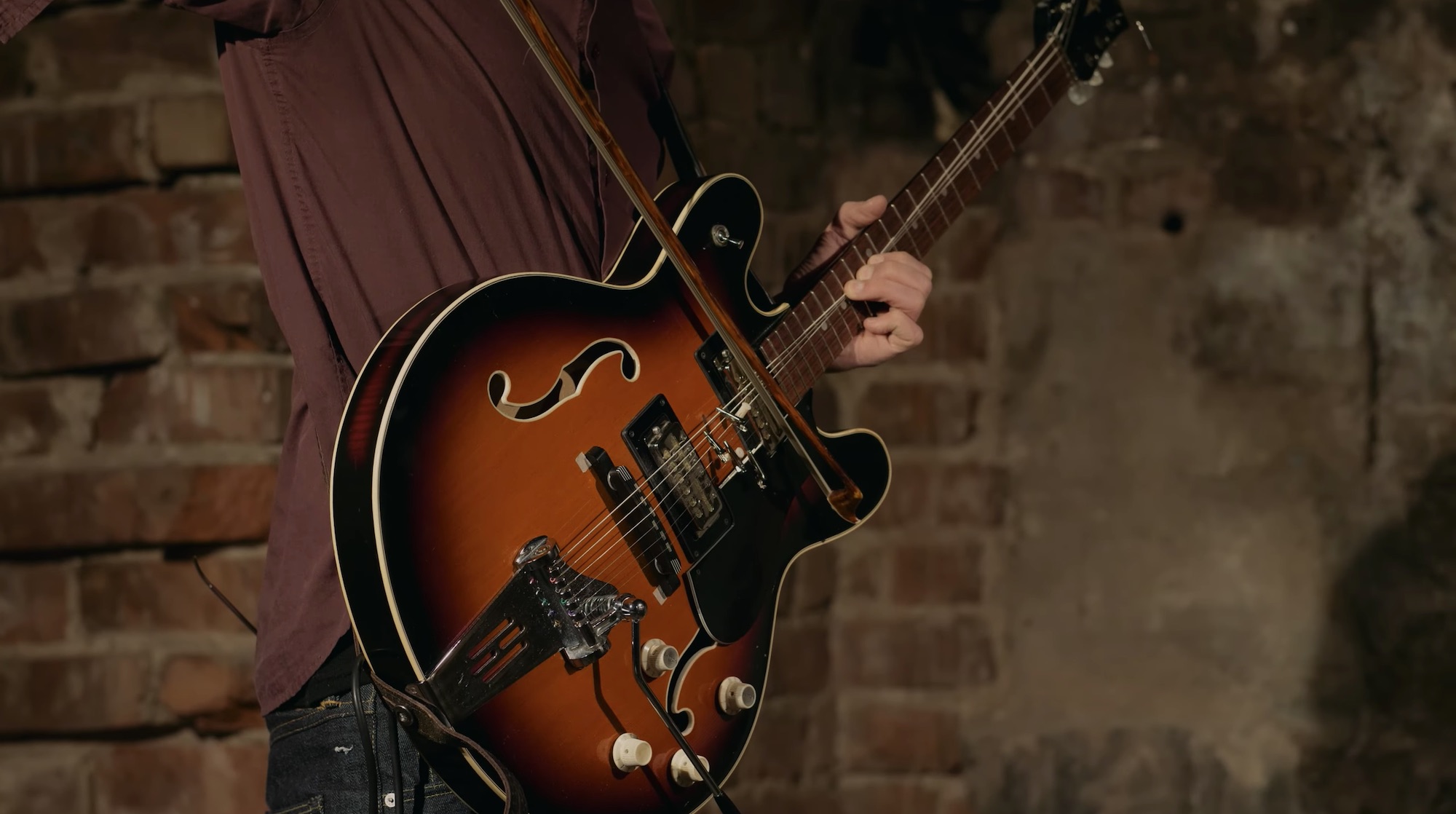 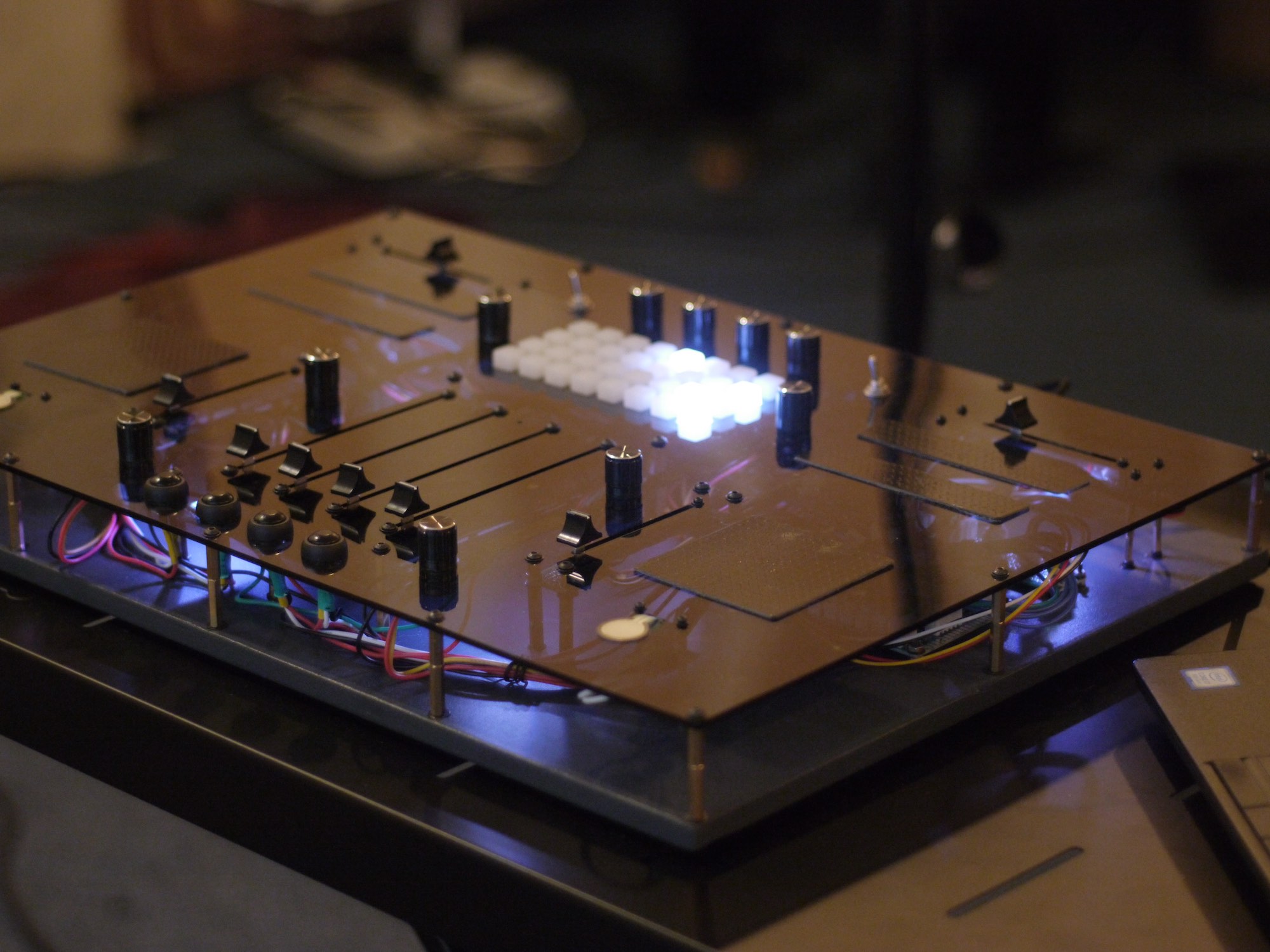